Fall is here and with that comes cool nights, football, and the changing colors of the trees.  As a photographer, this is one of the most exciting times to head out to the woods and capture Mother Nature’s beauty.  An old friend, who had recently retired, contacted me and said she wanted to learn more about photography and asked if I’d be interested in going on a Fall Color Photography trip.  My reply, “You bet”.  With all the wet weather we’ve experienced this year, the trees were having trouble turning and most lost their leaves before becoming in full color, but it would be fun to see what we could find. 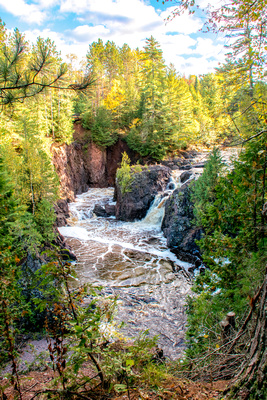 On the first day, we headed to northern Wisconsin, just outside of a small town called Mellen, to Copper Falls. While there are multiple trails, we chose to take the Doughboys Nature trail.  It is a 1.7 mile trail that follows the Bad River and Tyler Forks tributary around the Copper and Brownstone falls and cascades. All along the way are overlooks down into the deep gorge for stunning photo ops.  As we walked further, the two rivers flowed into a dramatic convergence. It was powerful.  It was dramatic.  It was loud.  I couldn’t get enough pictures.  It was hard to capture all of what we could see and feel into one picture frame. But sometimes you put the camera down and just enjoy. The second day we headed toward Ironwood, Michigan.  We began with a chairlift ride up the Copper Peak Ski Jump, reputed to be the tallest jump in the country. The woman who sold our ticket was full of information not only about the history of the jump but also its future development.  They are renovating the jump in order to host year-round ski flying events and training, (yes, ski flying in summer!). Once you reach the top of Copper Peak on the ski jump lift, you continue going up on a 24-story elevator, and then you climb 8 stories of stairs to get to the top of the jump. Being a little afraid of heights, it was a personal challenge to go all the way to the top, but the scene did not disappoint; you can see over 2500 square miles, 3 states, and Lake Superior.  It was a breath-taking sight with a vast view of fall color and sparkling streams peeking through the branches. 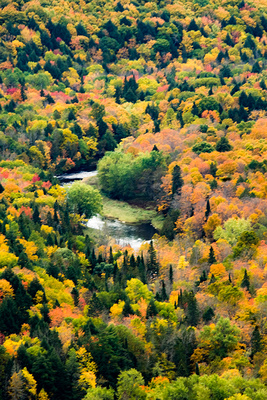 Next, we drove north along Black River Road which runs along the Black River and its waterfalls along the way.  It was a nice road, the waterfalls and parks were easy to find, and had nice trails. We stopped at Potawatomi Falls, Gorge Falls, Sandstone Falls, and Rainbow Falls.  Each waterfall was different and offered distinct features to photograph. (Quick Tip: Some of the waterfalls have better views of the falls from the opposite side of the river). The road ends at Black River Harbor where there is a lovely park and a suspension bridge that takes you to a beach along Lake Superior.  It was the perfect time to sit on a bench and enjoy the setting sun over the lake after a long, fun day of hiking and photographing. 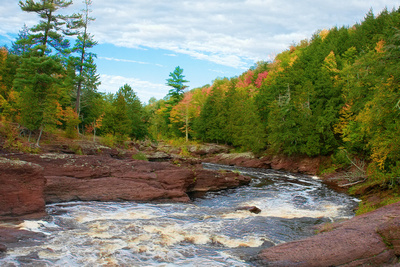 On the final day of our fall color photography trip we arrived at the Lake of the Clouds overlook in the Porcupine Mountains.  It was just before sunrise and there were photographers from all over the world waiting to photograph the sun emerging over the horizon. The clouds were so thick across the entire river basin they looked like water and I had to clarify to some first-timers that the Lake was only a part of the scene. As the fog lifted, you could start to make out the shapes of the trees below.  Eventually the Carp River and its scenic bridge made their appearance. Every 5 minutes presented a new composition; it was hard to leave.  Once I tore myself away, we headed to the Porcupine Mountain Summit Trail and Peak.  It is a moderate incline up the mountain, but the trail is clear and wide and there are welcoming benches to rest on along the way.  Toward the top is an overlook with a breathtaking view of colorful trees all along the Mountain range.  Further along a boardwalk and up a little higher stands the tower you ascend where you experience a more expansive view. The tower felt sturdy and even though it is 1,958 feet in elevation, it isn’t scary at all.  Even though most trees in and of themselves may not have been full of color, seeing them all together from these vantage points was a magnificent sight. 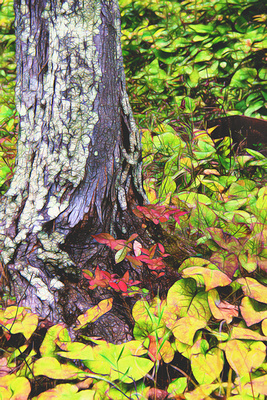 Our last stop was at the Presque Isle Unit of the Porcupine Mountains. There are three waterfalls, Nawadaha Falls, Manido Falls, and Manabezho Falls, but we didn’t have to time visit them all so we went to the largest one, Manabezho Falls.  Here, you can cross the river over a suspension bridge and walk on large rocks to get dramatic shots that make it appear as though you are right in the middle of the river. Here is where I turned the perfect adventure into an “Oops”.  There was a trail on this side of the river and a map made it look as though there was another bridge not far up the river, (yes, I’m blaming the map).   Even though we were short on time, I convinced my friend to take the trail on this side of the river and cross back over that bridge, that bridge that we slowly came to realize didn’t exist.  We walked, hiked, climbed, and at times, prayed we’d make it out alive.  Parts of the trail were full of roots making them difficult to navigate, some sections were very steep to climb, while others were quite slim on cliff edges making it seem life threatening. But most of the other people we met along the way seemed not to notice or be bothered by it, so maybe it’s just me. (I did previously mention my fear of heights).   As luck would have it, there was no other bridge to cross back on and we ended up hiking and climbing past all the other waterfalls until we reached the road we had drove on to get there.  Crossing the river via road, not bridge, we then had to walk all the way back to our car.  Side note: We had previously been discussing picking up hitch-hikers and how “we would never!”, but I decided if anyone drove by my thumb was coming out! One blessing in all of this was seeing a pileated woodpecker on the way back! He did his “laughing” call for us, so fun! After that adventure, it was definitely time to head home.

Lake of the Clouds

Each of these locations are good for families in that they have good signage and are easy to access and navigate. Most offer picnic areas and parks and even concession stands in the summer.   However, with the steep hills and raging waters, it can be very dangerous when hiking along the rivers so it is important to keep kids close at these times. Also, check out where the bathrooms are when you get there; most have restrooms at the beginning of the trails and nothing in route, so plan accordingly.  Dogs are allowed on the trails as long as they are on a least and not left unattended.

I must conclude by saying every single person we met, on the trails, in the hotels, the gas stations, and the restaurants, were not just kind, but also very friendly.  I guess when you live in or are experiencing beautiful places, you find beautiful people.  And hopefully, the experience of nature in all of its glory helps me to be one, too.